How to Manage a Diaper Rash at Home

Most babies will get a diaper rash at some point in their life. They are most common in infants between the ages of four and fifteen months old. Diaper rash is a form of dermatitis or skin inflammation. It develops in the area underneath the infant’s diapers and appears as bright red skin on the baby’s buttocks. There are many causes of diaper rash but most can usually be treated at home.

Diaper rash are usually mild, with a few red spots on the buttocks, but can sometimes be extensive, which reach the groin, stomach and thighs. The severity will depend on how soon before treatment is given. As previously mentioned, most children will get a diaper rush and thus, diaper rashes should not be treated as a sign of negligence.

Diaper rashes are commonly causes by irritants or contact dermatitis, but the following are the most common causes of diaper rashes in infants:

The following are characteristics of diaper rashes:

Bright red, puffy and tender-looking skin in the diaper region, usually in the buttocks, but may spread to the genitalia, stomach and thighs 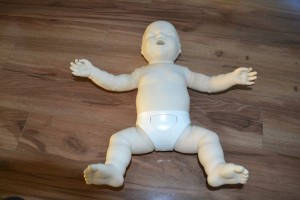 Manage a Diaper Rash at Home

discomfort felt by the child. To manage an infant’s diaper rash:

Although a diaper rash is not an emergency, it is still necessary to apply first aid to ease the infant of whatever symptoms he/ she may be feeling. To learn more about how to treat diaper rashes and other medical scenarios related to infants, enroll in workplace approved Childcare First Aid Training.