A nosebleed or epistaxis is often a cause of worry for parents and babysitters. 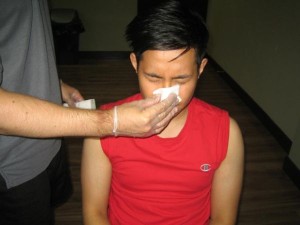 However, nosebleeds are actually common among children and rarely a true medical problem. They most commonly occur as a result of injury to the soft tissues of the nasal cavity. Other possible causes of nosebleeds include dry air, repeated nose-blowing or nose-picking, and some allergies.

Disclaimer: the information posted on this page for first aid tips for nosebleeds is for learning purposes only. To learn to recognize and treat nosebleeds and other minor bleeding issues sign up for first aid training with a workplace approved provider near you.

Regardless of the cause of the bleeding, first aid treatments are often the same.

When to seek professional help

Although nosebleeds are rarely serious, there are some cases that require further medical attention.

If there is repeated bleeding or bleeding that lasts for more than 20 minutes, call your healthcare provider immediately. Repeated nosebleeds might indicate an underlying condition. For example, some children who have allergies most commonly get frequent nosebleeds because the blood vessels in the nasal cavity become irritated so often and fail to heal properly.

Cases of recurrent nosebleeds can be easily treated with either medical or surgical procedure. There are different medications (usually in spray form) that may be prescribed to control nosebleeds. Your doctor may recommend cauterizing the blood vessels. Cautery is a procedure wherein electric current, laser or silver nitrate is used to burn the bleeding vessel. After the procedure, the doctor packs the nose with gauze or an inflatable latex balloon to put pressure on the bleeding vessel.

If the cause of bleeding is unknown, the doctor may recommend other tests to rule out more serious conditions, especially involving the brain or spinal cord and bleeding problems.